Welcome to 2020 and welcome to Comic Addiction. There's a lot of unknowns as this blog gets started, but the one constant is comic books. Lots of comics books. So, let's start there.

I've been buying, reading, and collecting comics since the early 1980s. That's a long time. Over those many years I've bought and read a lot of comics, but I've also sold a lot of comics. Comics I was happy to sell. Comics I wish I hadn't sold. And comics I don't even remember having until I see a random post on Twitter or Instagram of a cover and it hits me, "Oh! I had that issue!" Comics are a constant in my life, but the kinds of comics, the publishers and titles, they've changed a lot over the years for a variety of reasons. Some of those reasons were based on interests, which I think is obvious. Some of those reasons were financial, another obvious reason. Other reasons were based on the thought that I had read enough of a certain publisher or a certain title and it was time to move on and try something else. I even had a few years where I dropped it all to see if I could buy and read everything that was "core" DC Universe. No matter what the reasons, I read comics that I enjoyed, even if just for the enjoyment of the memory of what a title was once like. Nostalgia will sway any comic book fan to buy a comic they don't necessary want to buy. There's a massive difference to the comics I'm reading today in comparison to this time last year. Part of that reason is a year ago I thought I was going to stop buying comics and just sell off everything. I started selling comics on Ebay and Instagram and sold quite a bit, but kept those comics that meant a lot to me because I wasn't 100% sure I was going to quit, but I was seriously considering it. That changed when I read Jonathan Hickman's HOUSE OF X and POWERS OF X miniseries that was the relaunching of the X-Men line at Marvel. I will eventually write an in-depth post about my love and hate for the X-Men, but I was very skeptical of another "relaunch", but I couldn't look away from Hickman's passion for the characters. I had read Hickman's run on Avengers and Fantastic Four where prior to his work I had dropped those titles from my pull list. I would eventually drop those titles again (although I had help when Marvel stopped publishing Fantastic Four) once Hickman left the titles. There's something about the "back to basics" and yet "out of the box" take he has on all of the Marvel characters he writes. Once there was news about the ongoing titles and the creative teams who would work on those titles I had to stick around and try them out, and in doing so I started picking up other books that I stopped reading thinking I wouldn't be reading comics anymore, and also adding new titles that I hadn't read in a while or brand new titles. Hickman didn't just get me excited about reading X-Men comics, he got me excited reading comics in general. And then I read the first two issues of all of the new ongoing X-Men titles and... well, I'll talk about that in another post in the near future.

If you looked at my current purchase list, I'm all over the place. There is some rhyme and reason to it if you follow some of the themes. I pick up all of the X-MEN related titles, and have all of the news ones coming already on my pull list. I pick up any RED SONJA and VAMPIRELLA series that pops up. I've just started to pick up STAR WARS comics again. I'm not sure I'll go back and hunt down back issues of previous Marvel released titles, but I'm considering it. I pick up most comics that Vault Comics is currently publishing. I've owned all their comics to a certain point, but during my "sell because I'm getting out" phase, I sold a lot of those back issues. My plan is to pick up trade paperbacks of those titles I'm missing issues so I can have them for research purposes. I dove back into BOOM! Studios titles last year and picked up most of the new series that started in 2019 and will probably continue to pick up all of their new series. Titles like LUMBERJANES and POWER RANGERS will probably be picked up in trades or hardcovers because I have enjoyed them in the past, but I can't afford picking up back issues. There's also a list of Marvel books I've recently decided to "try out" again like AVENGERS, FANTASTIC FOUR, CAPTAIN MARVEL, and a few others because I'm feeling nostalgic for Marvel lately. There are also other random titles that I buy, and you'll read more about those on the blog down the road I'm sure.

Every Monday I will post my "to buy" list for the week. It is a complete list of books I'm hoping to pick up that week. Not all of those books will be on LCS pull list, but a majority of them will be. I will also talk about FOC (Final Order Cutoff) books on Fridays. If you're not familiar with FOC, it is the deadline for all final orders to be in to Diamond/Previews so that those books will be shipped to retailers. The FOC list is posted on Previews World's website and is updated every Tuesday. Orders are due from retailers on Mondays, so if you're ordering something and want to make sure you have it in before the FOC is due, be sure to get it in before your retailer sends in their FOC order on Mondays. I do know you can add to an order after FOC, but the availability is very limited. I wouldn't take the risk if it's something you really want to purchase.

While new comics are great, I'm also hunting down a lot of back issues for series that I lost during the "Great Purge". I doubt I'll ever buy all of those back issues, but I do want to hit a lot of the bigger titles like UNCANNY X-MEN, AMAZING SPIDER-MAN, TEEN TITANS, AVENGERS, TEENAGE MUTANT NINJA TURTLES, and others. Will I eventually buy them all? Who knows, but I'll be writing and podcasting about it at the site, so be sure to check back for those tales. And if you're looking to get rid of some of your back issues, drop me a line on Twitter or send me an email and let me know. Maybe we can work out a deal.

I'm very excited about 2020 and look forward to sharing a lot of my comic book fueled adventures with all of you.

Thanks for coming by! 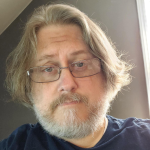